If your stress is causing a lack of erections, you may be wondering when and if you will ever be able to return to satisfying sex life. The good news is you will, but it will take some work on your stress levels before that is possible.

Erections are an involuntary process your brain controls. It's the same type of involuntary response as getting goose bumps when you're cold or blushing when you're embarrassed. The Autonomic Nervous System (ANS) has two parts that work together to cause you to have an erection: The sympathetic and parasympathetic. The sympathetic nervous system helps you become sexually aroused and prepares your body to take action when stressed, also known as the fight or flight response. The parasympathetic nervous system kicks in after a stressor is no longer a threat by calming your body down.

When Stress Is Causing a Lack of Erections

When you're stressed, the parasympathetic part of the ANS is unable to calm your body down because the sympathetic is working overtime trying to make the stressor go away (either by preparing your body to get away from whatever is causing you stress or giving you the energy to fight it off). Therefore, when you are trying to have sex and introduce a new stressor (sexual arousal), your body can't process the new message, which is how stress is causing a lack of erections.

Stressors That Cause Erectile Dysfunction

Just about any type of stress can cause erectile dysfunction. Problems at work, relationship conflict, illness, financial burdens, or even fear of aging can be stressful enough to interfere with sexual responses. For some men, erectile dysfunction is the cause of their stress. If they've had problems with having or keeping an erection before, they may fear it will happen again, causing stress and then repeat lack of erections.

There are a few indicators stress is the likely culprit for erectile dysfunction. 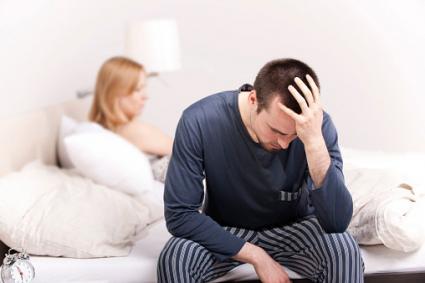 Performance anxiety happens when you feel stress about your ability to obtain a strong erection for sexual intercourse or maintaining an erection to finish intercourse. You become fearful or embarrassed, and your anxiety increases to where you anticipate not being able to have an erection, which results in recurring difficulties actually having an erection. A 2005 study found performance anxiety was the only unique predictor of sexual dysfunction for men.

Increased anxiety causes stress and narrows blood vessels. Less blood flowing to the penis makes it more difficult to have an erection. Even men who generally do not have difficulties may not be able to get an erection because they are overcome by sexual performance anxiety.

Some options for managing your condition include:

If you've confirmed stress is the reason you are not able to have or keep an erection, stress management techniques can help you.

It's important to understand, however, that sometimes in times of extreme stress, you may just need to ride it out until life gets better. Alternatively, you can speak to your doctor about medication that can help you with your anxiety, depression, or specifically, erectile dysfunction. Usually, men who go this route have chronic issues with erectile dysfunction.

Do not blame your partner if he is having a problem with erections. The loss of erections is not because he doesn't find you attractive or sexually stimulating. Erectile dysfunction is a common occurrence in men, and it's usually temporary. Keep in mind if you pressure him about it or make him feel like a failure, the situation can become worse. The best thing you can do is ask your partner what is troubling him. Talking, listening, and helping will help him feel better about his inability to have an erection and ensure he will return to his normal sexual performance once he is no longer under extreme stress.